HLP 011 -THE POWER OF OUR WORDS - https://pattydominguez.com

Patty: Hey there Patty Dominguez with Episode 11. Welcome to Her Legacy Podcast we’re talking about the power of words. Here we go.

Hey there my leader Patty Dominguez here with Episode 11. Thank you so much for joining me on this episode. I’m flying solo. I wanted to share a little bit about a story that happened here in my home because I know that it is something that can help you surprisingly a lesson that I shared with my teenager that is I think super helpful. It really does not matter at any age whatever age you are. So here we go.

All right well thank you so much for joining me on this episode of her legacy podcast where I’m talking about the power of words. Let me ask you a question. When I say. I hate myself.

I can’t do that? Who am I to do that? Why she has more success than I do. I’m awful at this?

I absolutely suck at doing that. I’m too fat I’m too old I’m to this I’m too that. Think about how many times you said those words to yourself. And what it really means and I think we operate in a way that at that moment we might be frustrated and we may be thinking those thoughts in that moment. But the fact of the matter is the ripple effect is significant. 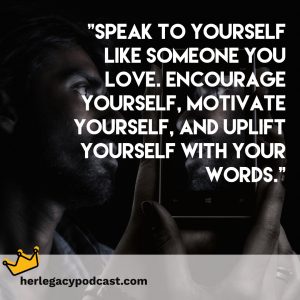 This is a topic that came up over the weekend with my teenager so I have two boys my one teenager is 18 and my other son is 15 and the 15-year-old me he’s a bit introverted side and just like with any teenager he’s a bit self-conscious. I mean I can’t imagine being a teenager in this day and age with mobile phones and social media and this incessant need for comparing and filters and all these things. And so what I noticed is there is such a climb in terms of the way that teenagers the way they talk to themselves the way they talk about themselves.

And I was thinking and shared with him a video that I came across a while back because some of you may know I’m really into personal about it. I mean. On a big level. And I absolutely love what I’ve learned. And I’ve directly implemented it into my life and it has been significant. As a matter of fact, me focusing on the personal development that I do I believe has made me a far and away better more consistent coach than I could ever be?

Just knowing the strategies that I know. In fact it is because of Hershaw development that I am able to see things in my kind see the gaps and keep them stuck to

see the things that they don’t see and I have the privilege of being a part of that moment where they just flip to the other side and say wow I never thought of it that way or wow this is amazing. Now I owe so much to this to all the books that I’ve read and things that I’ve done. But last year I started a coaching program with Jim Fortin. 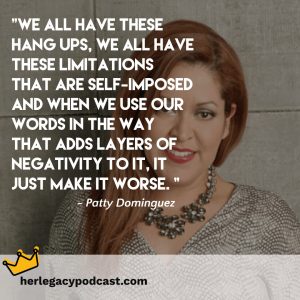 He teaches selling persuasion subconscious training. He’s really absolutely amazing. And since last year has been one of his coaches that I help with his group coaching program and what’s so fascinating is I’m giving you part of the story for my teenager who is 15 and then there are people in different groups that I’ve been a coach for. It doesn’t matter 15 25 45 55. We all have these hang ups we all have these limitations that are self-imposed. And when we use our words in the way that adds layers of negativity to it just makes it worse.

It’s almost like it’s more of an impression a deeper rooted it just level of negativity that we find ourselves very difficult to get out of. So I want to share this one experiment that I sign out or if you’ve ever seen it it’s from a doctor from Tokyo. His name is Masaru Emoto  and he did this water experiment once upon a time. I don’t know the exact date but if you go on YouTube and actually put in the show notes what he did was he wanted to understand the electromagnetic frequencies and the effects of words on water.

And just quite simply when you look at this video of him in a post he took a glass of water with rice and water and he wrote the words love. And then the second glass he had the same setup the rice in the water and he wrote the word hate. And then the third one he didn’t have anything on it. And so what he would do over this period of time it was 30 days or something like that he would go to the glass. With that said Love and he would show appreciation and love for it. And then the second one the one that was that said hate he would say words of hate. Hate and anger and all that.

And in the third one didn’t have anything he just ignored. And what happened over this extended period of time this water experiment showed the impact of those words. In essence the ripple effect. And the first glass with the love. It had a sweeter smell and it was starting to ferment in the second hate glass. It was kind of murky and muggy like weird looking water.

And then the third one that was ignored it kind of got this rotting color to it. Right at the bottom with the rice and you could see it for yourself. But what are the things that Masaru Emoto started talking about in the extensive experiment around quantum frequencies. I’m not getting too heady but in essence the impact of words the vibratory feel that it sets out has such a huge impact. So when we say these things about ourselves it’s not just in that moment it has a deeper impact than we think is even possible. So I will go to Florence Scovel Shinn who is one of my favorite authors. 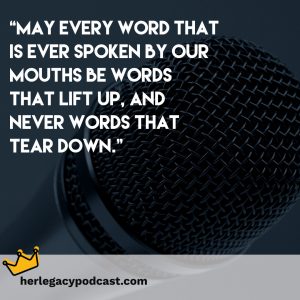 She passed away in 1945 but in 1925 she wrote this book The Game of Life and how to play it. And in that she said our words do not return void. So think about those words the things that we say to ourselves. Are they positive or are they negatives. And what can you do in that moment to stop yourself from saying you know what counsel bad. That is so not true. I mean I still do it to this day. I’m like I’m such an idiot. Wait wait wait wait. Cancel that cancel that’s not true.

Just be careful because our words do not return void and so long story short when I showed this to my 15 year old this was after an episode that he had where he was really beating himself up about something that had happened I can’t remember what it was because in his teenage angst he was just kicking the bad and stomping and in his room saying Guy I hate myself I hate myself and I said you know what. You better watch what you’re saying because it’s not as easy as what you’re saying.

It has huge impact. He’s what do you mean and he was all he was upset in the moment and I showed him the video we started talking about that impact of words and our consciousness and the frequencies that we’re sending out there. And so again I invite you to take a look at my show notes that show 11:00 because I think it’s pretty remarkable. And it is a truth philosophy that I live by. Our words do not return void. So I hope that you catch yourself when you’re in those moments of stinking thinking not only singing thinking but the words that come out of your mouth that are just damaging.

Just remember the ripple effect is real. So with that thank you so much for joining on this episode of Her Legacy Podcast where Tuesdays have a show where I interview someone who is leaving their legacy and Thursdays? It’s just my random talk. Real talk things that I’ve learned and the way that I coach so that hopefully it imparts a nugget or two that may create an aha moment earned epiphany. That’s what I’m looking for. All right thank you so much this finds you well. And I’ll see you on the next episode.

Thank you so much for being here…

– The full transcript of this episode. 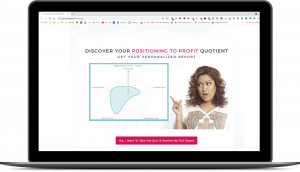 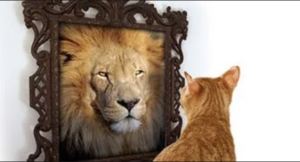